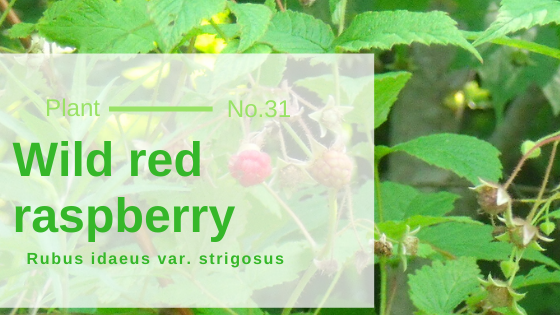 In Chippewa, mis’kominaga’wunj, wild red raspberry is one of hundreds of wild edible and medicinal brambles. Its fruit is not a true berry, but a cluster of drupelets. So, yeah, bananas are berries and raspberries are not.

Around Haliburton you’ll also find purple-flowering raspberry (rubus odoratus), which will be covered in its own feature someday, and dwarf raspberry (rubus pubescens) among other brambles (link to the iNat species list – there are lots!) Haliburton Flora lists this variety as “idaeus var. strigosus” which I will use in the title, but it’s more commonly referred to simply as “rubus strigosus” nowadays, or they are not even differentiated. You can find it by the European species Latin name at native plant nurseries, so I am assuming they are “close enough”.

We had a laugh when we saw a Hydro One worker picking off raspberries in the driveway at the studio, unaware he was being watched, until he looked up. Tender young shoots once peeled are edible too, raw or cooked.

Raspberries are wonderful for jellies, jams, tarts and pies. I make both a batch of Manchester tarts and a batch of Scottish fern leaf tarts at least once a year, and both have raspberry at their core.

The wilted leaves can be toxic, so dry them properly! Dried berries and fresh or dried leaves make a nice tea. As a juice it’s so intense the general rule of thumb is to add it to other juices, like apple or pear. Raspberries are great for wine too.

Common usage includes raspberry leaf tea as a pregnancy and uterine tonic. It’s long and widely considered woman’s medicine, especially for during and after childbirth. Read the Warnings below, please!

The raspberry drupelets can be used to make a raspberry colored dye, and even an edible dye for baking purposes.

It’s easy to plant suckers, but be aware they will spread like wildfire, popping up all over the place. Because red raspberries produce new growth primarily from the root system, they usually are grown in a hedgerow.  The purple flowering species is a good alternative if you want a raspberry that is less aggressive, although the berries are much less tasty.

It’s good to know that the typical growth cycle of brambles is such that the “floricanes” (second-year canes) are the ones that produce fruit.

Avoid planting your wild red raspberry in the same spots where you’ve grown anything in the tomato family, since both are susceptible to some of the same diseases.

Pollinator refuge areas are important for brambles as well as other fruits – better get on that pollinator garden idea if you haven’t gotten to it yet! I’m pretty sure that one is on everyone’s to-do list. I am hoping to add two more bee and butterfly patches to the one-acre this year.

For a rare few, it may be too stimulating for first trimester use.

And the Usual Cautions:

1) Most medicinal herbs, if edible, are meant to be eaten in moderation, even sparingly. Some require extra preparation.

2) People can be allergic or sensitive to nearly any plant; try new herbs one at a time at your own risk.

3) For medicinal use, I must recommend receiving a diagnosis and working with a reputed health care provider. I generally do not post specific treatments and dosages because I think that is best between you and your health care provider, and ideally monitored. Herbalists do not have an official certification yet, but that may be in the works.

4) Anyone pregnant, nursing, or taking prescription drugs should talk to a health care professional before adding new food items to their diet.

5) Many plants have look-a-likes, and sometimes they are poisonous.

As an Amazon Associate I earn from qualifying purchases. Every book I reference that is available on Amazon is linked to with an associates link.

The Path to Wild Food

Edible and Medicinal Plants of Canada

The Yoga of Herbs: An Ayurvedic Guide to Herbal Medicine

Indian Herbalogy of North America: The Definitive Guide to Native Medicinal Plants and Their Uses

The Herb Book: The Most Complete Catalog of Herbs Ever Published (Dover Cookbooks)