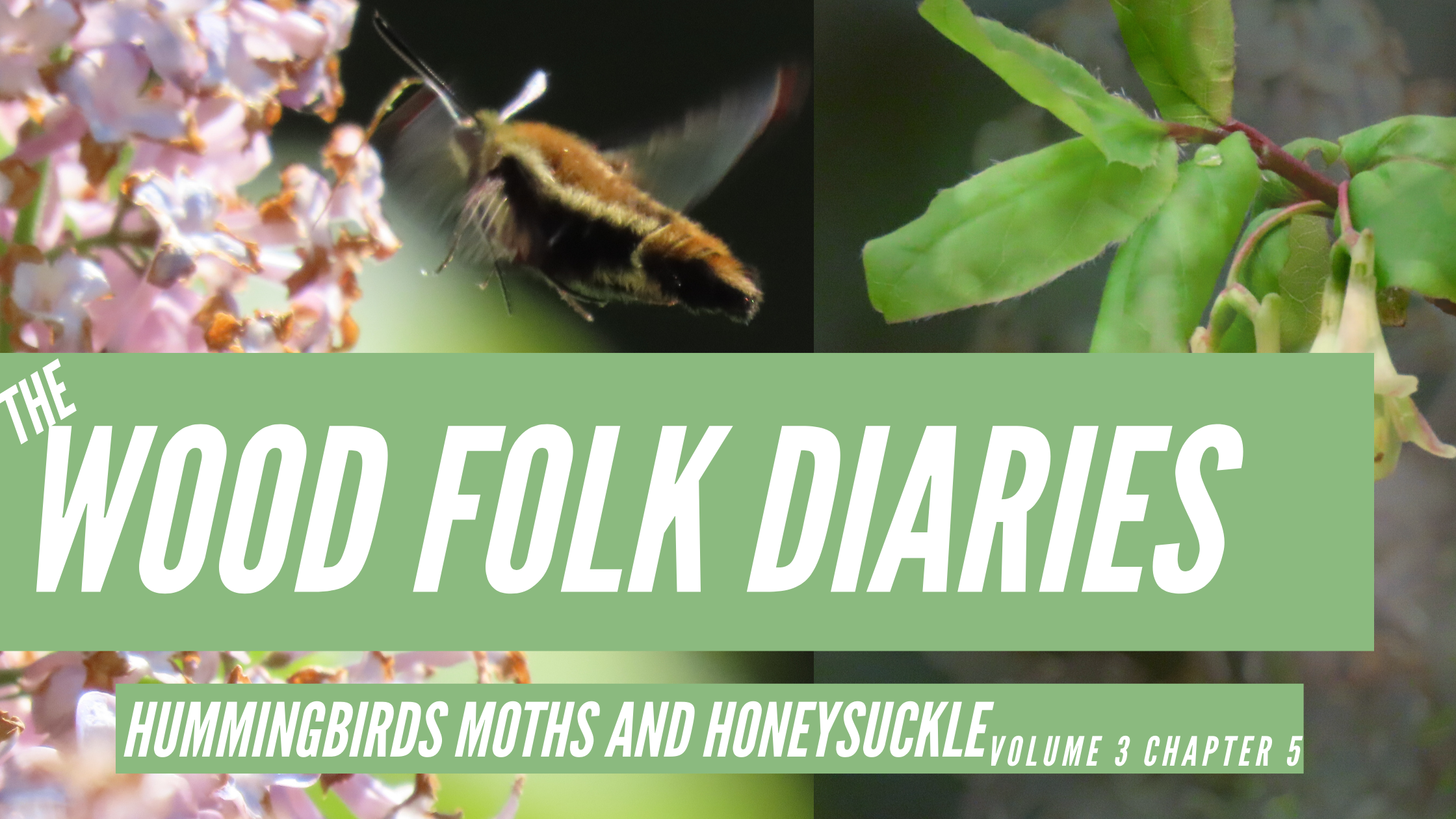 Have you seen a strange little hummingbird? Unlike most other moths, clearwing moths fly and feed during the daytime, mimicking a hummingbird. They’re not just hummingbird-like in their hours and nectar choices, but also in appearance, fast wingbeats and hovering. I remember the first time I saw one. I was sitting with my mother, and this interesting creature was zooming over my parents pond like Tinkerbelle. This was before you could use the Internet for ID. Much later, when I found out these exist, that memory/mystery clicked.

Clearwings are a type of sphinx moth, day flyers of the predominately night flying sphinx family. Sphinxes are some of our larger moths. In July, here around Haliburton, the night active sphinxes are easy to attract via mothing (when bug enthusiasts hang a white sheet and shine a black light on it overnight to check early morning, before gently shaking the attracted moths off). Various sphinx may be spotted by your porch light come morning too. This Instagram post of ours has some of the sphinx we’ve spotted, of the 24 species noted for Haliburton, Ontario, Canada on iNat.

For hummingbird moths, patiently waiting beside their favourite blooms is your best chance to spot them. If you have a lilac hedge, they are a good hedge to bet on. The moths are especially attracted to their sweet scent. Perhaps bring a lawn chair.

Of our daytime sphinx, hummingbird clearwings (hemaris thysbe) are the most common around Haliburton, with diervilla clearwings (hemaris aethra) a distant second. The rest are rarer: snowberry clearwing (hemaris diffinis) and titan sphinx (aellopos titan). They can all be hard to tell apart. The five-spotted hawk moth (manduca quinquemaculatus), which is that “tomato hornworm” people hurry to destroy, also looks kind of like a hummingbird; you might spot it late in the day. Btw, the hornworm can be moved to plants like nightshade or to a sacrificial tomato plant instead of destroyed. If transferring to a wild plant, double check the caterpillar and potential host plant ID. They’re all green, chunky horned caterpillars when they are big and host plants may vary.

Adult hummingbird clearwing moths eat the nectar of many plants including pollinator plot all-stars like bee balm, blue vervain, coneflower, Joe-pye weed, milkweeds, spreading dogbane and thistle. They’ll also drink from popular nonnatives like fragrant lilac and fall phlox, and some of our naturalized common “weeds” like red clover or that hawkweed that sometimes spatters yards here with pops of bright orange and yellow in the summer (we do have a couple yellow flowered, native hawkweed). Blueberry and some of its relations provide nectar too. There are claims on Wiki and elsewhere that this moth is the “primary pollinator for some species of orchid”, but I have no idea if that’s true for any of our orchids here in Ontario.

But before that, as caterpillars, hummingbird clearwings have fewer hosts plants. These include the title honeysuckle. They use snowberry too, like their snowberry clearwing cousins. Rose family‘s Hawthorns, cherries, and plums are other native plants that serve as hosts. European cranberry bush may also be used as a host plant, but I am not sure if they use the native cranberry bush.. theoretically?

Besides planting some of these native plants to attract them, leave your leaves! These moths cocoons are hidden in leaf litter, joined by a variety of important insect-life. They overwinter sheltered by the leaf litter. Burning leaves at the dump should become a thing of the past for their sake. The usual advice, like avoiding insecticides, will help too.

This is the moth pictured throughout this article – the diervilla clearwing!

Northern bush-honeysuckle is the only confirmed host plant for the diervilla clearwing caterpillars. We briefly touched on this plant in our honeysuckle feature and some day it’ll have its own page here. There is so much of it around the 100 acres, no wonder I see its namesake moth species fairly often.

Northern bush honeysuckle is a great low laying native shrub that spreads and can do well in partial shade, and the flowers are pretty too (as pictured).

This conservationist, Rusack, apparently saw a diervilla clearwing feeding on a blackberry flower. Blackberry is another plant very abundant around the 100 acre, so it would be no surprise. The adults will drink nectar from the same plants as the hummingbird clearwings.

And watch the grasses too. I found one just chilling in the grasses once. I think it might have spend the night there:

The host plants of the snowberry clearwing caterpillar are snowberry of course, as well as honeysuckle and bush honeysuckle, and dogbane.

A titan sphinx has been spotted and then recorded once here on iNat. The buttonbush is one of its hosts and a few can be found on the Minden side of Haliburton County. (I am trying to grow a buttonbush on the other side of the county, and will update!) County-wide native plants you can grow to host titan caterpillars include the whole Madder family. Mainly, partridgeberry and bedstraws.

All our clearwings have diverse tastes as adults and the same plants listed for the hummingbird clearwing should be attractive to the others – and countless other pollinators.

Next month’s diary is about some butterflies that have an affinity for grass. Then sedges the following month. Native grasses and sedges are more amazing than they sound. 😉