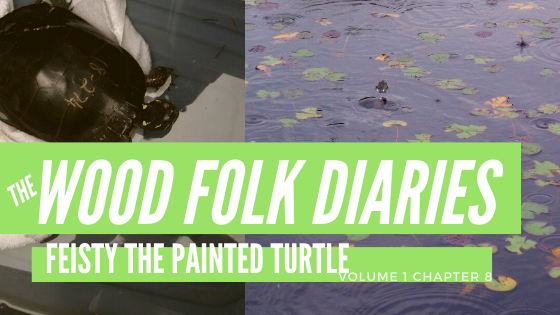 One of the pleasures of living in a county with over 600 lakes and rich in wetlands is turtling. Maybe that is not a word but since birding is a word, and herping is too broad, let’s go with turtling. My computer’s dictionary sure isn’t up on nature slang.

On a sunny day it isn’t too hard to spot painted and snapping turtles, usually on a floating log. Or maybe scurrying from their perch if you’re not quiet enough in your sneak up. There’s usually a whole shiny pile of painteds! It’s fun to see them in their element. But sometimes these species at risk cross our paths in precarious places, the road in particular.

Feisty was my first painted turtle rescue off to Ontario Turtle Conservation Centre in Peterborough, Ontario. He/she was frozen in shock in the middle of the road, obviously traumatized. She was clipped by at least one motorcycle. Part of her shell was just hanging on, and oozing blood. I had some serious hand washing to do after my feisty encounter, and learned to carry around gloves (and a bin with a towel, among other things!)

Miskwaadesi (Ojibwe for painted turtle) was my second emergency run. Her shell was only slightly cracked, but if water gets into even a slight crack a turtle can drown. That’s why you’re not supposed to put water in a carrier when bringing a turtle in. And that’s why they need help even when discovered with such a minor seeming injury. A volunteer at the center got to release Miskwaadesi.

These turtles live in the same watershed. Unfortunately, it’s a hotspot for turtle mortality. They need to be released into the same watershed, as it’s generally thought they will hone in and travel toward said home wherever they are released. It’s not easy being a turtle in Ontario, especially when your ancestors land has been crisscrossed with asphalt. ALL of our turtle species are at risk.

And so, helping turtles cross the road is a pretty big deal around here.

Where you can safety pull over to move a turtle across the road, here is a basic primer for the hardest encounter around here:

Painted turtles are easier – just pick up and move them onto the side in the direction they were going. And if it’s a snapper in your path, realize they cannot bite your finger off, relax. But try not to get bitten anyway ;). I keep a snow shovel and also have used my car’s floor liner as a sort of snapper sled!

Another organization to get familiar with in our area, besides OTCC, is Haliburton’s Turtle Guardians. Check out their highly informative website and pass it along! And don’t forget our local Woodlands Wildlife Sanctuary who also take in turtles for rehab.

Feisty sends her regards. And we will certainly share some turtling wood folk diaries in the future where no animal had been harmed! Sunny turtles just soaking in the rays! I promise. 🙂 Next month meet the lost gosling!

Donate for the love of turtles – 100% of the proceeds go to the turtles! > Ontario Turtle Conservation Centre.