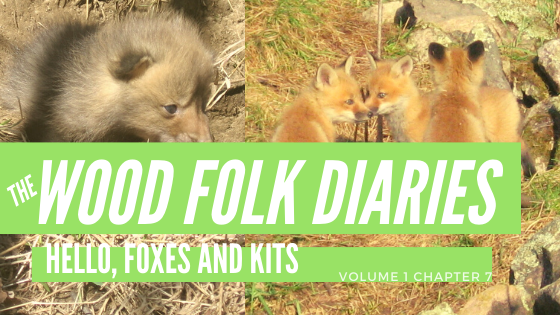 Before I showed up at the Song of the Woods Studio, a couple foxes and some kits hung around for two years.

I myself have seen many fox in these parts, but I’ve never had the pleasure of watching a family at their den. Robin gave me the scoop, and a whole folder of pictures!

Here’s a baby fox, commonly called a kit, pup, or even cub:

Over those two years there were 2 females, 2 batches of pups per vixen, 4 sets of pups in total. At least one years batches of kits were born weeks apart with such a size difference it illustrated how quickly they grow up.

Robin got a little too close one day and a newborn kit sort of imprinted on him, eyes still unopened. He wanted to hobble follow Robin around. Robin gently prodded him back into the den hole with a stick.

Yet people pulled over to watch the pups all the long weekend, as the den was near the road, and then poof – they disappeared from prying eyes. But they didn’t go far. Overnight mama fox went up a hill and thru the bush, and dug a new den under the roots of a tree, running deep.

A local who used to raise them said if you go near them the mas will kill them, but nothing like that happened. It’s an old wives tale. (I confirmed this with rehabbers.) Foxfolk will move their brood if truly disturbed. A wolf pack might similarly move off if some mustached man keeps wolf howling at them – just ask Robin.

The foxfolk would be out hunting while the “hoomans” observed the kits. Busy wild folks. Grouse feathers covered the field every morning. The kits eat a lot of meat before they start on mast like berries.

You might have heard the haunting sounds of a fox vixen screeching in the woods. Here’s something aww inducing instead of spine shivering, baby fox calls:

I suppose when the bunnies, grouse and other kit-fodder populations go down, the fox den elsewhere. Going off bunnies if I may, there are still not many bunnies at the studio. I don’t have many on the one-acre either, so getting to experience this myself is probably a ways off. Robin, you lucky guy.

Our local wildlife rehab, Woodlands Wildlife Sanctuary regularly rescues foxes. The one in the next clip became a viral star and was even featured on The Dodo.

If you love foxes and wildlife and want to show it, WWS’s donation page is here. Tell them Robin and Rachel from Song of the Woods sent you. 🙂 One of our upcoming Wood Folk Diaries will be about the gosling that first led me to WWS. And Feisty The Painted Turtle is coming up next!