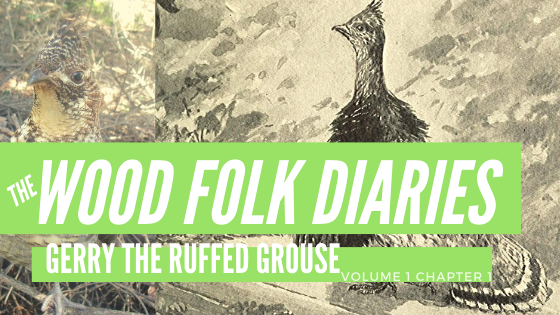 I’m disappointed in myself because I didn’t call her Henriette or him Henry, but I promise if another ruffed grouse (Ojibwe bine, lat. bonasa umbellus) cozies up to me that is exactly what I will name our new friend. I’m also disappointed with how often I’ve called these birds “ruffled”. Ruffed, Rachel, RUFFED. And how Geraldine as a name for her popped in my head I cannot recall.

Not that I could sex him or her. The sexing signs are vague, mostly sizing. She could be a Gerald. And you see, in the springtime, where there’s one, there’s usually more. Sometimes I would see them both at once and I stayed hidden because we all want chicks, don’t we? But I couldn’t tell who was top and who was bottom.

I do know that my drummer, while he didn’t mind me sitting and watching the one time I did, didn’t want to stroll with me after his beat. It could have been his being all business that day. Or, much of what follows is truly Geraldine.

I should note, while I never found a nest, eggs or young, I didn’t take up much of the grouse’s time, just in case. A ruffed grouse egg is pictured to the left, the illustration yellowed from age. It’s actually a light cream color and the degree of speckle varies. Its size is about  3.8 x 3.4 cm. She might lay a dozen or so, at a pace of 1 per day.

The first of many grouse

Flashback to my first ruffed grouse. I hear a clucking ruckus and I suspect someone’s chicken is on the lam in my woods. Closing in, the bird notices me and takes to the trees. The abrupt sound of its take-off is startling. A blaring thump-thump-thump-thump-thump of machinery wings. It’s one of those forest sounds that can baffle a person until they finally catch sight of who’s making it. Going off appearances, I know this helicopter thunderbird isn’t some escapee pet chicken.

Most grouse sightings go that way: I am busted in my approach and they take immediate flight. Or I simply watch from a distance as they browse the forest floor until out of sight, moving much like Mick Jagger, head and neck bobbing on their typically rotund bodies.

Despite all their camo and rapid take-offs, they are a common lean meal for locals like the red fox.

Gerry, let’s call him or her, ran up to me on my way to the outhouse one early-April, and escorted me back to my front door. We had a cordial morning chitchat. And for a swath of that spring, at least a month-long, this was our daily ritual. When you gotta go, you gotta… grouse.

Here’s a YouTube compilation of grouse month (it’s also on Facebook), for the enjoyment of fellow wood folk:

Clips include Gerry following me, even being called, seemingly trying to understand what I am saying, a variety of ruffed grouse sounds and expressions from chatter to alarm, Gerry’s tail spread and neck puffed when he or she hears a racket, and various acrobatics.

Ruffed grouse tracks are basically miniature turkey tracks about 2 inches long. My hand is 6 1/2 from the tip of my middle finger to palm’s end:

They usually go in a mostly straight line, with a subtle wave. Hmmm. So do I. Might be part grouse. Maybe that explains… Hmmm.

Sometimes they flock together leaving a mess of tracks, though I’ve not seen more than a few at a time. Perhaps with a male following in pursuit. It’s fun to track their path, weaving and bobbing through the forest.

Ruffed grouse droppings can be found easiest in late winter to early spring, pictured yellowish-brown due to eating aspen buds. The pellets are reminiscent of a peanut shell, an inch or so long. For comparison’s sake, similar to squirrel scat which is smaller and more like an actual lone peanut in size.

The beat goes on

500+ Grouse pictures and videos later, and a little over a month, Gerry just up and vanished. Was it a he who moved on to more fertile grounds? A she who went and made a nest somewhere and raised chicks? Did one of my red foxes snatch a meal?

The day my grouse friend vanished a wild turkey sprinted through my yard as if being pursued. I always wondered if Gerry became the easier target that day. But I hope she or he made it through 2017. It’s the fate of a ruffed grouse to be here and gone too quickly. I just hope it was a good life for our dear feathered friend. It certainly wasn’t lonely.

To accompany us out, here is a video I caught of another ruffed grouse drumming, a slow lead-up, crescendoing into a flurry of beats, the Babatunde of the woods. It’s actually not hard to mimic grouse hand-drumming on your quadriceps for those of you so musically inclined. See you at the next chapter of The Wood Folk Diaries!