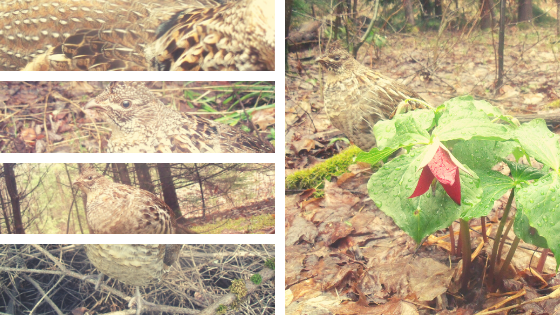 Back when our region was bursting with hundreds-years-old mature conifers there were not nearly as many ruffed grouse. The more deciduous and ripe with young thicket the more ruffed the woods became. Now, these grouse are one of the more common sights around Haliburton, in the forest and crossing the road.

The ruffed grouse prefers the bushier mixed side of my one acre, versus the barer zone that mature white spruce loom over. The spruced forest floor is an emerald bed of mosses. And the occasional herb like our only orchid, the helleborine. There’s nowhere to hide.

Ruffed grouse seek cover. Luckily for them, there are added brush piles I placed around purposefully for my smaller wild friends to hide out in. A half-decent shelter when there are not feet of snow to tunnel into, nor thick leafy shrubs and saplings.

Although I often see them hanging out under the needled low boughs of conifers mixed in with hardwoods and thicket. Some white spruce, white pine, balsam fir, and eastern white cedar are pleasing to roost in.

I only have one mature trembling aspen/poplar stand with hardly any understory, but there is an area filling with poplar saplings and it has grown grouse-approvingly dense. The grouse appears to have a special kinship with the poplar tree. In the wintertime, they consume vast quantities of its dormant buds.

Within the stemmy woods, a grouse mother may choose a tree or a stump, or even a rock, to put her shallow nest beside.

Shrubs like mountain maple and red osier dogwood have edible parts for grouse and are useful for cover. Christmas fern provides the same duo of benefits. The grouse basically hide out and eat all day – the Netflix and chillers of the forest.

Ruffed grouse enjoy (mostly) summer fruits like our blueberries, creeping snowberry, pin cherry, wild raisin, wild red raspberry, wild strawberry, wintergreen, and the “grapes” of the false Virginia creeper. I’m sure about every fruit around is fair game! That is if they don’t eat the flower first, including apple tree blossoms. I’ve seen them atop my serviceberry and black cherry trees often in the winter nibbling the buds.

Even red oak’s acorns are on the figurative table, although like most of us they’d prefer an acorn less bitter.

The ruffed grouse may nibble on some dried up bits of various wild plants in the winter, such as staghorn sumac berries. But twiggy bites of dormant buds and catkins of poplars, white birch, ironwood, willows, beaked hazel, and speckled alder are unfortunately about all they have in the depths of winter. Maybe they don’t mind missing their fruit and leafy salads.

That we live on a dirt road means easy access to sand or gravel. They swallow such “dirt” to help grind up harder food sources.

The winters of grouses discontent

As our climate changes and the snow cover is decreasing, it will be harder for the grouse to find adequate cover in the wintertime. This will leave our ruffed grouse more vulnerable to predation, and worse, starvation or freezing to death.

In our farmlands south, just north of Toronto, there used to be feet of snow as well. Now there’s no snow cover for much of winter. That effect appears to be our future farther north into cottage country. Our poor ruffed grouse friends will likely vastly decrease in number in these conditions of less snow and blistery cold.

To end on a happier note, the ruffed grouse is designed for the acrobatics of moving and flying through thick brush. They are amusing to watch. Gerry will demonstrate (acrobatic highlight at 0m23s):