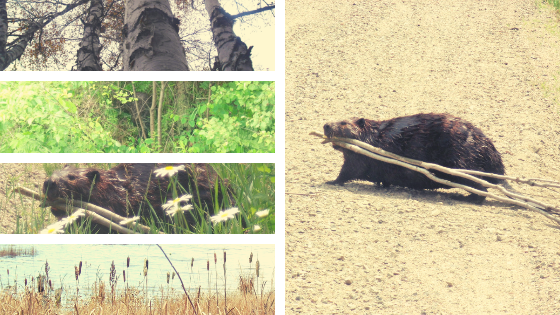 Beavers use not only rocks and mud to make their dams, but sticks, bark, leaves, grass, and other plant matter. These dams, canals, and more beaver activities architect the neighborhood, benefiting everyone from frogs to songbirds. This makes beavers an exceptionally “keystone species”. This second feature in our Wild Allies Series will wrap up with a beaver documentary below – just click play! But first, here’s how they use wild plants…

The beaver on the left has found a small sapling that he’ll chop down in one bite. This will be the fate of many of the trees around the pond, to varying numbers of chews.

Next, he drags a few out at a time and back to his lodge. He can carry his own weight in materials.

His wooden mud packed lodge is intricate, with underwater entry, quasi-skylights for airflow, and wood shaving dirt floors. There’s a bit of a moss and leaf rug in there too, with a touch of grass perhaps.

He’s even built a root cellar with a food cache.

Aquatic roots are unsurprisingly included in their diet, especially starting in spring. These include but are not limited to cattails, pondweed, and water lilies.

Beavers even go for the forbs like clover and giant ragweed. Through the summer they eat a variety of canes, grasses, ferns, sedges, shrubs, and vines. Like with black bears, even the occasional mushroom makes the menu as autumn set in, but trees become the focus again.

If you grow a garden next door to a lodge, your corn and beans may be on the menu. Your apple orchard is up for grabs too. Gardening around here isn’t the easiest. The deer and raccoons are more than happy to fill in for any lack of nearby beaver ponds.

Beavers are strict vegetarians officially, but, having seen mice eat mice, squirrels eat birds, rabbits in similar shenanigans, and even deer eating carrion, I am not going to be surprised if someone captures a beaver eating a nibble or two of meat.

Waaaaaait! Someone already has:

And there you go. I’m shook. The comments on that video are full of firsthand accounts of beavers with fish munchies like it’s not even rare. Uncommon maybe. One viewer says he’s seen beavers dragging salmon to shore and eating over half of the fish, repeatedly. A few commenters are lost in cognitive dissonance, trying to claim that’s a fishy stick. If you are too, read this article. Surely people won’t claim a skilled naturalist wouldn’t know an otter from a beaver or a salmon from a stick. Okay, some will.

If the same can be admitted about other rodents, deer, etc., perhaps the dogmatic won’t be so adamant in the future that no beaver ever touches meat. Whether it’s curiosity or an attempt to fill some nutritional deficiency, well, admitting it’s even a thing will be the first step to filling in that blank.

An organization I know of in our area that rehabilitates beavers is Aspen Valley Wildlife Sanctuary. They’re on Facebook, check them out:

And here’s the wrap-up. Further learning. This was uploaded 2 years ago, so hopefully, it will remain. 39 Minutes! Enjoy! Ah, we knew that wouldn’t stay up! Here’s a new literal walkout, one of our own videos. Enjoy!

This site uses Akismet to reduce spam. Learn how your comment data is processed.