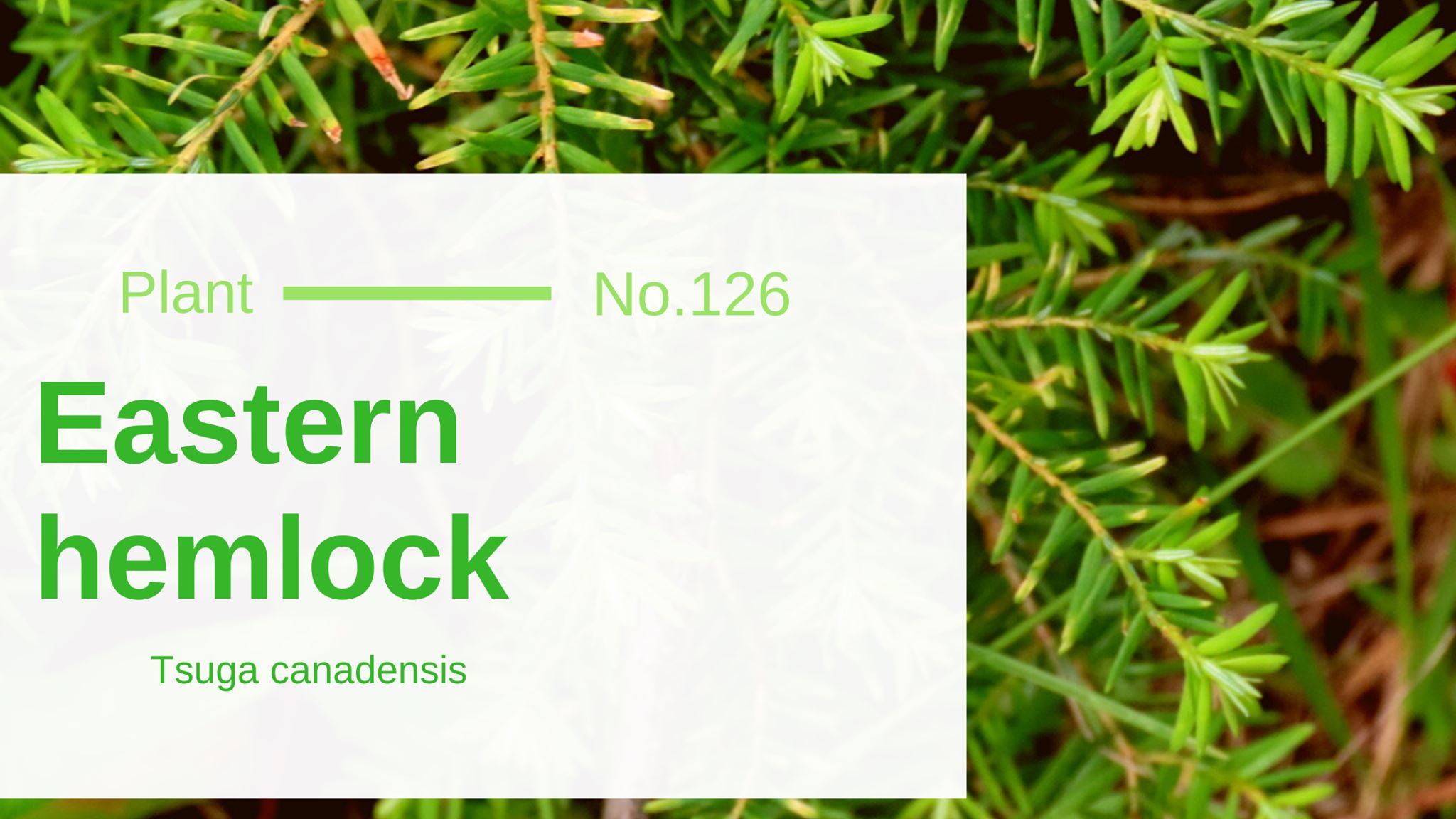 Eastern hemlock (tsuga canadensis) can be found in moist hardwood forests. I haven’t seen any on the 1 or the 100 acre I frequent, but I know people with lots of hemlock on their property. I just planted the sapling below in 2021. If a porcupine does eat it, I won’t be mad. They’re my favourite mammal to come across on hikes and deserve a treat.

The species is currently threatened by the hemlock woolly adelgid (adelges tsugae), a bug from east Asia that started obliterating North Americas hemlock in the 1960s. They’ve shown up in Ontario but have yet to spread rapidly here thanks to early detection. Usually governments go after this bug with insecticides. But another bug, L. nigrinus, a native to the Pacific Northwest, is being tested as a control method as it preys on the adelgid. I have mixed feelings about importing a nonnative bug to deal with an exotic bug, but what do I know. (Unless you’re directly involved) you’d be surprised how often this has been done! (See pictures of the hemlock woolly adelgid here.)

Firstly, if you’re pregnant don’t consume eastern hemlock. And be sure to know how to differentiate the hemlock tree from the similarly needled shrubby Canadian yew, which has been called ground-hemlock for its visual similarity. Yew is fatally poisonous!

Otherwise, fresh needles can be eaten in moderation. You can eat the whole branch tip but it’s more of a starvation food (most folks will spit it out!) Tips freeze well and can add a little flavor and prettiness floating in jars of herbal vinegars or syrups.

A tea can be made from the leafy twigs (leaves = needles) any time of year. Or if beer is more to your liking, it’s a possible ingredient in spruce beer. Fresh maple sap can be a sweetish base for your conifer infused beverages in the spring.

The oil in the leaves and twigs is used commercially to flavour soft drinks, gum, etc.

The sweet inner bark, best from winter to early spring, can be eaten raw or boiled, or dried and ground into flour for baking or thickening stews. The cambian can be used the same.

Eastern Hemlock is primarily said to support these body systems:

Common usage includes astringent uses like bark boiled for a (additionally styptic) wound cleanser or tea for congestion and colds. The plant is distilled to make Oil of Hemlock, a volatile oil that is used especially in herbal remedies for rheumatic pain or respiratory congestion.

Alternatively the plant can be used in warm water for a rheumatic soak. Hemlock pitch has been used directly, but as in many similar cases (ex. stinging nettle) it’s a counterirritant and will cause skin irritation.

The pitch can be used to waterproof basket work. Boughs can be used for shelter, bedding, even brooms.

It’s high in tannins so great for tanning leather, and dyeing leather, cloth or wood. Hemlock is used in recipes for an orange-red dye, and a chestnut to mahogany colour from the inner bark. Black can be obtained too. You’ll need a mordant.

The trees lose their needles easily just by shaking, making it a no-go as a Christmas tree idea. However, the cones are decorative in crafts.

The brittle wood can be carved, although it splits easily.

A hemlock that lives its expected 400-600 years will feed hundreds of thousands of beetles, birds and other wildlife over the centuries. It’s a wonderful investment. Native oaks usually get the limelight, but so many of our tree species are important! Many native plant nurseries carry eastern hemlock.

Absolutely don’t mistake the yew shrub for hemlock. If you make a tea out of yew, you will die.

And the Usual Cautions:

1) Most medicinal herbs, if edible, are meant to be eaten in moderation, even sparingly. Some require extra preparation.

2) People can be allergic or sensitive to nearly any plant; try new herbs one at a time at your own risk.

3) For medicinal use, I must recommend receiving a diagnosis and working with a reputed health care provider. I generally do not post specific treatments and dosages because I think that is best between you and your health care provider, and ideally monitored. Herbalists do not have an official certification yet, but that may be in the works.

4) Anyone pregnant, nursing, or taking prescription drugs should talk to a health care professional before adding new food items to their diet.

5) Many plants have look-a-likes, and sometimes they are poisonous.

As an Amazon Associate I earn from qualifying purchases. Every book I reference that is available on Amazon is linked to with an associates link.

Edible and Medicinal Plants of Canada

Eating Wild in Eastern Canada: A Guide to Foraging the Forests, Fields, and Shorelines

An Eclectic Guide to Trees East of the Rockies

Plants Have So Much to Give Us, All We Have to Do Is Ask: Anishinaabe Botanical Teachings

Encyclopedia of Herbal Medicine: 550 Herbs and Remedies for Common Ailments

Medicinal and Other Uses of North American Plants: A Historical Survey with Special Reference to the Eastern Indian Tribes